Ticket-writing jumped in 2018 amid outrage about reckless driving, but way down in 2019.

By Gretchen Schuldt, Wisconsin Justice Initiative - Oct 30th, 2019 11:51 am
Get a daily rundown of the top stories on Urban Milwaukee

The number of traffic cases filed in the court fell by 46%, or 26,462 cases, this year through September, a reflection of decreased enforcement. 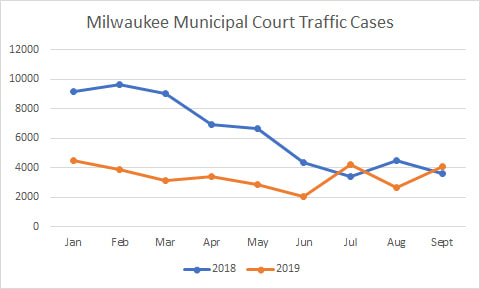 While not every traffic ticket becomes a Municipal Court case – some may be dismissed before they get to court, for example – court filings are a good proxy for police activity.

There were 30,940 traffic cases during the first nine months of the year compared to 57,402 through September of last year, according to Municipal Court statistics. This year’s numbers also trail the 31,515 filed total through September 2017.

Ticket-writing jumped in 2018 amid public outrage about reckless driving. The anger has not abated, but the ticket writing has.