By Ruth Conniff, Wisconsin Examiner - Oct 2nd, 2019 12:12 pm
Get a daily rundown of the top stories on Urban Milwaukee 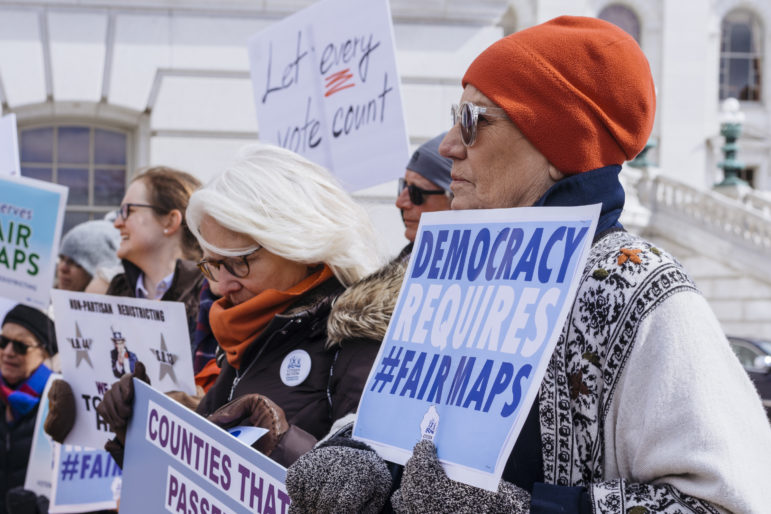 On Sept. 17, Sheboygan County became the 48th of Wisconsin’s 72 counties to endorse the idea of creating a nonpartisan process for re-drawing the state’s voting maps.

The resolution “affirming the right of all Wisconsin citizens to fair and equal representation” and “requesting the adoption of a nonpartisan process for the preparation of legislative and congressional redistricting plans,” passed the Sheboygan county board by a vote of 20 to 4.

In the most recent Marquette University Law School poll, 72% of respondents, including majorities of Democratic, Republican and independent voters, favored a nonpartisan process for redrawing voting maps.

“Wisconsin’s maps are widely recognized as among the most rigged in modern American history,” the Wisconsin Fair Maps Coalition asserted in a press release celebrating the Sheboygan county board’s vote.

The coalition, comprised of 15 organizations and hundreds of individual members, is sponsoring a Fair Maps for Wisconsin Summit in Marshfield on Nov.9 that will feature national and statewide speakers and will be open to the public.

“If you want to join this movement, reach out to us and help get politicians to do their job and stop gerrymandering,” said Sachin Chheda, director of the Fair Elections Project and chair of the Wisconsin Fair Maps Coalition. “The people don’t want to see manipulating and rigging of the redistricting process. We the people are in charge here, and a broad bipartisan majority wants to see the era of corruption and partisanship end.”

The county resolutions around the state call for the legislature to engage the nonpartisan Legislative Reference Bureau staff to come up with new maps, and prohibit the use of partisan data. These measures, also put forward in bills sponsored by Rep. Robyn Vining (D-Wauwatosa) and Sen. Dave Hansen (D-Green Bay), are based upon the independent, nonpartisan redistricting process used in Iowa.

“The majority of Wisconsinites understand that our gerrymandered maps are leading to the decay of our democracy,” said Dana Schultz, executive director of Wisconsin Voices and co-chair of the WI Fair Maps Coalition. “It’s time our legislature understood that, too.”