By Rob Mentzer, Wisconsin Public Radio - Sep 7th, 2019 11:18 am
Get a daily rundown of the top stories on Urban Milwaukee 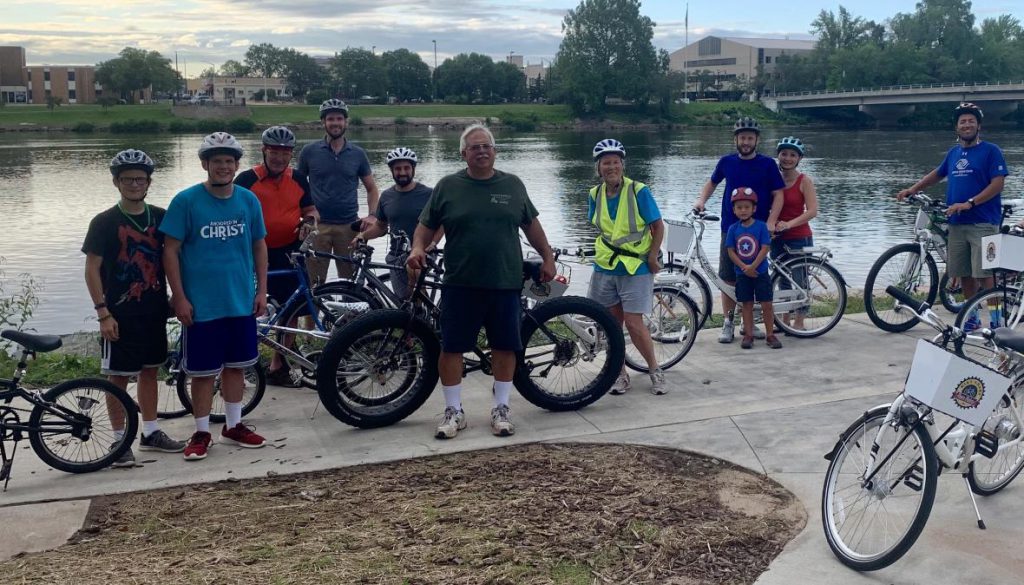 A group of riders at a community bike ride event in Wisconsin Rapids pose for a photo on the city’s riverfront. Photo from the Wood County Health Department.

A bike share program in Wisconsin Rapids is showing that, with grant support and work to promote it, small cities can make the program work.

The River Riders Bike Share program is in its second year, and residents and visitors to the central Wisconsin city of about 18,000 people have logged more than 1,000 rides and 1,500 miles on the bikes so far.

The program is designed to promote health and build community. And while bicycle sharing programs are common to big cities and tourist destinations, the Wisconsin Rapids program is part of a new wave to bring the program to smaller cities and towns.

“As far as we know, Wisconsin Rapids is one of the smallest cities to have an organized, docked bike share system,” said Mayor Zach Vruwink at a recent community bike riding event. It’s taken work to promote the program and boost participation, Vruwink said, but it’s also helped people in the city make connections.

Cheryl Kuhn lives in Fountain City in western Wisconsin, but she grew up in Wisconsin Rapids and came back for the August event. Kuhn took one of the bike share bikes, operated by a national company called Zagster, for the ride.

“I like the bike paths around Rapids,” she said. “They’re friendly and well-maintained.”

The bike share program “definitely builds community,” said Hannah Wendels, a program coordinator with the Wood County Health Department. “It’s great to meet new people, get more active in the community, as well as being more active in general.”

Bike share bikes are in six locations around the city, with 33 bikes available, including two side-by-side bikes and one tricycle bike for those with different abilities. The cost to rent one is $1 per hour. The program was launched with the help of a $50,000 grant from the Wisconsin Partnership Program in 2018 and has received some local funding.

The paper mill was historically the biggest employer in Wisconsin Rapids, and local Verso and Domtar mills still provide the city’s economic backbone. But there’s a significant tourism economy, too, around the city’s lakes and the nearby Sand Valley Golf Resort. The bike share program is an amenity for visitors as well as locals.

More small cities are set to follow Wisconsin Rapids’ lead. Vruwink said he’s been contacted by several Wisconsin cities interested in learning more about the program. Wausau is set to launch its own bike share program on its riverfront.