By Laurel White, Wisconsin Public Radio - Jun 8th, 2019 11:43 am
Get a daily rundown of the top stories on Urban Milwaukee 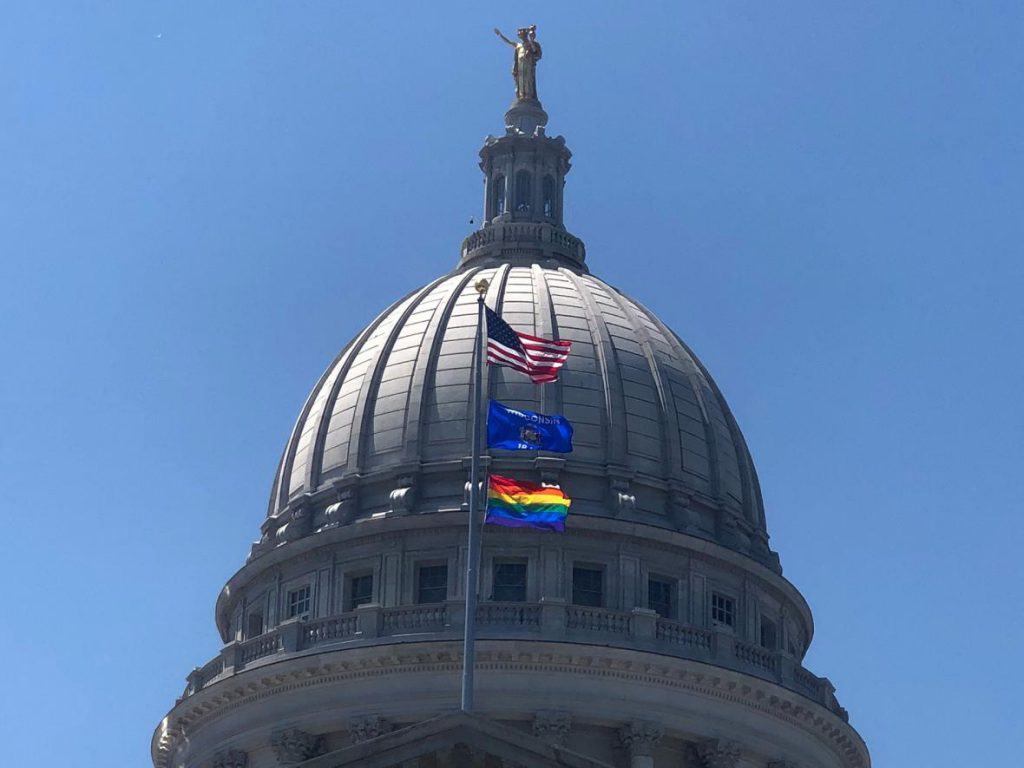 The LGBTQ flag was raised over the state Capitol building Friday for the first time in Wisconsin’s history.

The flag will fly for the entirety of June, which is LGBTQ Pride Month.

A small crowd gathered outside the Capitol to watch the flag raising, including Clay Thomas of Madison.

“It just kind of means that we are finally represented by our government, they see us,” Thomas said. “We ride on the shoulders of giants here, with how the gay rights movement has progressed over the years. I think it would be really meaningful to the people who have given so much.”

Deb Dawson, also of Madison, said it was a very personal moment for her as the mother of a gay man.

“It’s just acceptance and inclusion, diversity,” Dawson said. “We need that in our city.”

She called it “an oasis in what feels like a sea of craziness in the United States.”

“Publicly displaying the Rainbow Pride Flag has become an important visual symbol of support for the LGBTQ community,” the order read. “The people of Wisconsin have made critical steps toward LGBTQ equity, but we recognize that there is more work to do to ensure that every person in our state is treated with respect and experiences full equality in their lives.”

“Is this any more appropriate than erecting the Christian flag over the Capitol?,” state Rep. Scott Allen, R-Waukesha, tweeted.

“The U.S. and Wisconsin flags are flown over us as unifying symbols for all Wisconsinites. The governor’s action today is in no doubt a statement to advance a cause. The only cause that the Capitol flags should represent is 50 states united in one republic,” Craig said.

Members of the lesbian, gay, bisexual, transgender and queer community celebrate June as Pride Month, in part to commemorate the Stonewall Riots in June 1969. The riots were a clash between gay rights activists and police at the Stonewall Inn, a gay bar in New York City, that spurred nationwide advocacy.

The clash and resulting social movement are considered a watershed moment in LGBTQ history.