Even Beethoven sounded contemporary when this New York-based string quartet played him. 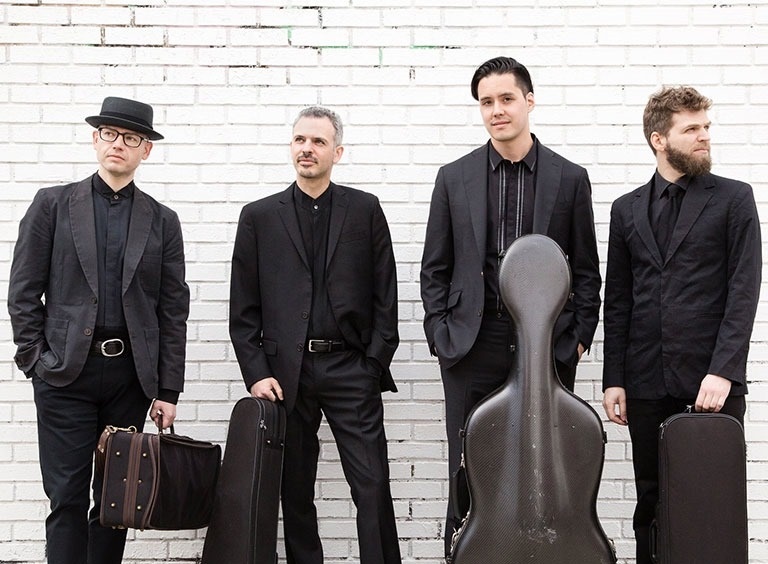 You can usually spot a contemporary music ensemble by its provocative name: Alarm Will Sound, eighth blackbird, red fish blue fish, Roomful of Teeth, etc. Last night at St. Paul’s Episcopal Church I heard Brooklyn Rider, a string quartet bold enough to not include the word “quartet” in its name. The group has recorded all of Philip Glass’s quartets and has played a vital role in New York’s new-music scene for more than a decade.

As part of the Frankly Music series, Brooklyn Rider presented a program titled “Healing Modes,” which aimed to reflect on different sicknesses and healing. Beethoven’s Op. 132 quartet served as an anchor in the second half, with its central Heiliger Dankegesang, the composer’s hymn of gratitude after recovery from a stomach ailment. The first half was comprised of five pieces commissioned from contemporary composers to match the theme.

Caroline Shaw, best known for her Pulitzer-winning Partita for Eight Voices, had the first spot with her quartet Schisma. A spacious opening gave way to sections of harmonic interest. The constant shifts from major to minor kept me guessing, with suggestions of fate and hope hanging in the balance. The overall form was a bit hard to follow, but the transparent textures and great harmonies engaged me to the end. Shaw’s program note mentioned Syrian refugees seeking asylum, and there was a quality of deep empathy that shone through this music.

Kanto Kechua #2 portrayed composer Gabriela Lena Frank’s struggle with an autoimmune disease. The strings were frequently voiced close together, and with doubled rhythms, creating an atmosphere of tight focus. A highlight was a beautiful violin melody over running cello arpeggios.

Du Yun’s piece I am my own achilles’ heel, a form that would never shape examined the obsession with hallucinatory states, a condition called Alice in Wonderland Syndrome. Glissandos were the main feature here, constantly stretching perception. A crystalline duet in harmonics showed the group’s strength in that particular technique. Later the glissandos took center stage, forming a sort of chorale in constant flux. It was the perfect way to demonstrate the ambiguity and shifting views of the topic. This chorale-like section lasted longer than I expected, but it was oddly touching. I would be interested to hear this piece again.

Matana Roberts’ borderlands focused on the U.S.-Mexico border tensions. In the introduction, one of the quartet members explained this piece was “largely improvised” using a graphic score. This seemed to worry the audience, but the piece worked. There were just enough signposts and foundations to hold all the improvised events together. Swarms of angry pizzicato and dissonant chords prevailed, and a section heavy on sul ponticello (bowing near the bridge) reminded me of the music of Wolfgang Rihm. Less effective were the spoken elements; the quartet members recited immigration statistics at the beginning and ended with the famous passage from the Declaration of Independence: “we hold these truths to be self-evident…” Unfortunately, without microphones, these spoken phrases were barely audible.

By the time a section driven by string harmonics began in Reena Esmail’s Zeher (Poison), I smiled; these composers clearly knew how to write to this group’s strengths. This piece was beautiful, combining drones and Hindustani ragas in an effective setting, coloring moods of pain, dread, and bottled-up frustration. I lost myself in the drones and could have kept listening for much longer.

The violinists and violist stood while playing the Beethoven quartet. It was a nice visual, but I wasn’t sure about the reasoning. They could have conceivably played the whole concert while standing. Maybe they were trying to imitate other groups who sometimes stand to play, like the Emerson String Quartet. Speaking of the Emersons, a certain quote came to mind from a review I read of their Beethoven cycle, which was my own introduction to this repertoire: “…they approach this music with New World directness rather than old-world warmth.” I found this to be absolutely true in Brooklyn Rider’s performance, and it really worked in this context. Rather than treat Beethoven as a separate world from the explorations of the first half, they played it like it was new. In the first movement, the group connected to the logic of Beethoven’s motivic development and phrase construction, while leaving sentimentality behind. Their interpretive skills were clearly honed from years of journeying with contemporary music. The dancelike second movement was a revelation. I had dismissed this in the past as one of Beethoven’s most boring quartet movements, but here, as Brooklyn Rider outlined each entrance with razor-sharp precision, I realized how unsettling and disorienting it is, like dancing deeper into a forest and losing your way. The droning Trio was beautiful, kept perfectly in time and connecting to the drones of the Esmail piece in the first half.

The third movement, the epic Heiliger Dankegesang, opened with a tempo on the fast side, which gave shape and direction to the phrases in the opening section. The cadence moments resonated wonderfully in the church. Multiple times I noticed some distracting grimaces from violinist Johnny Gandelsman at quiet entrances. At the Neue Kraft fühlend (feeling new strength) section, I would have liked a little more flexibility with tempo instead of a relentless march forward. The second hymnal section in Lydian mode was sublime, especially in this space. I sat there grateful that this music was being made in front of me. In the second iteration of the Neue Kraft fühlend, I really enjoyed the sensitive contributions of cellist Michael Nicolas, between his roving lines and noble anchoring bass notes. The last few minutes of this movement comprise some of Beethoven’s most timeless music, an emotional idea that keeps folding back in on itself. It’s timeless in the sense that it could have been written anytime between 1825 and today, and I’ve heard moments in new music that echo it (Andrew Norman’s Sabina and David Lang’s Little Match Girl Passion come to mind). An opportunity to hear and reflect on this particular chunk of music, in a concert that paired the new with the old, was a special moment.

The odd march following the slow movement was crisp; the group really punctuated the silences. The finale was full of angst from the dramatic opening all the way to the end, with nicely handled dynamic shifts. The beginning of the coda was amazing, with fiery triplets melting into a more relaxed mood. The group’s control at this moment made my jaw drop.

All in all, quite an evening, though I would have liked to see more audience members under the age of sixty. This program really had something for everyone: a universal theme of sickness and healing, compelling contemporary repertoire (all from women composers!), and a masterwork of the genre.