The Enduring Allure of Opioids

By Hayley Sperling, WisContext - Feb 24th, 2019 07:25 am
Get a daily rundown of the top stories on Urban Milwaukee 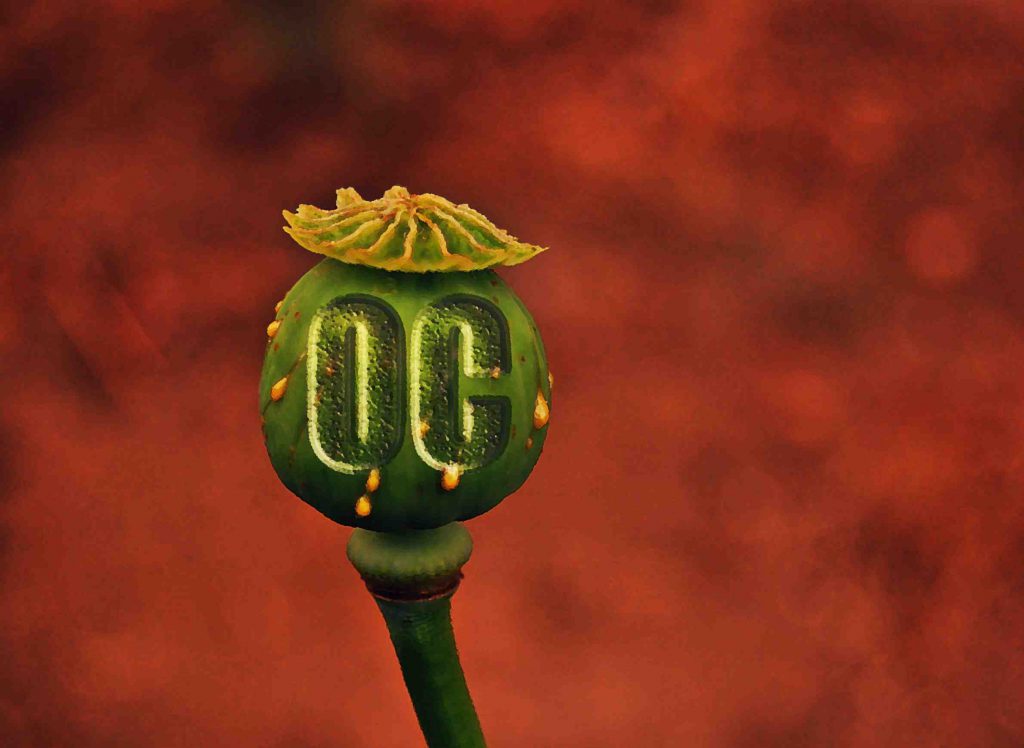 Illustration by Hayley Sperling and Kristian Knutsen; image via afgooey74 (CC BY 2.0)

The story of opioids in the 21st century is one fraught with urgency, pain and heartbreak. But this type of pain-relieving drug wasn’t always riddled with stigma. Rather, they are but the latest issue in a centuries-long relationship people have had with opium, opiates and their effects on those who use these substances.

To understand how opioids came by their contemporary and often-negative reputation, it’s crucial to examine their history. June Dahl, professor emerita of neuroscience at the University of Wisconsin-Madison School of Medicine and Public Health, discussed the history and changing perceptions of opium and its pharmacological descendants on March 28, 2018, at a Wednesday Nite @ the Lab presentation on the UW-Madison campus recorded for Wisconsin Public Television’s University Place.

Dahl framed the history of these drugs through the complicated relationship doctors have with pain and, as a result, pain relievers like opium, simple opiates and what are now called opioids.

The earliest reference to opium use was in about 3500 B.C.E., Dahl said. By 1300 B.C.E., the Egyptians cultivated the opium poppy plant, and its use spread when in 330 B.C.E., Alexander the Great introduced it to Persia and India. In the late 17th century, Thomas Sydenham, who Dahl described as “the father of English medicine,” recognized the power of opium, calling it “one of the most valued medicines in the world.”

Opiates like laudanum, codeine and morphine became the go-to treatment for many ailments in the US in the 19th century. From treating gastrointestinal illnesses to soothing teething children, these analgesics became a catch-all prescription, most often used for their “calming effects.”

“A drug that calmed people down was very appealing because physicians had almost nothing to work with at that point in time,” Dahl said. “There weren’t effective agents, there wasn’t even aspirin. So that was the good times when there was opium.” 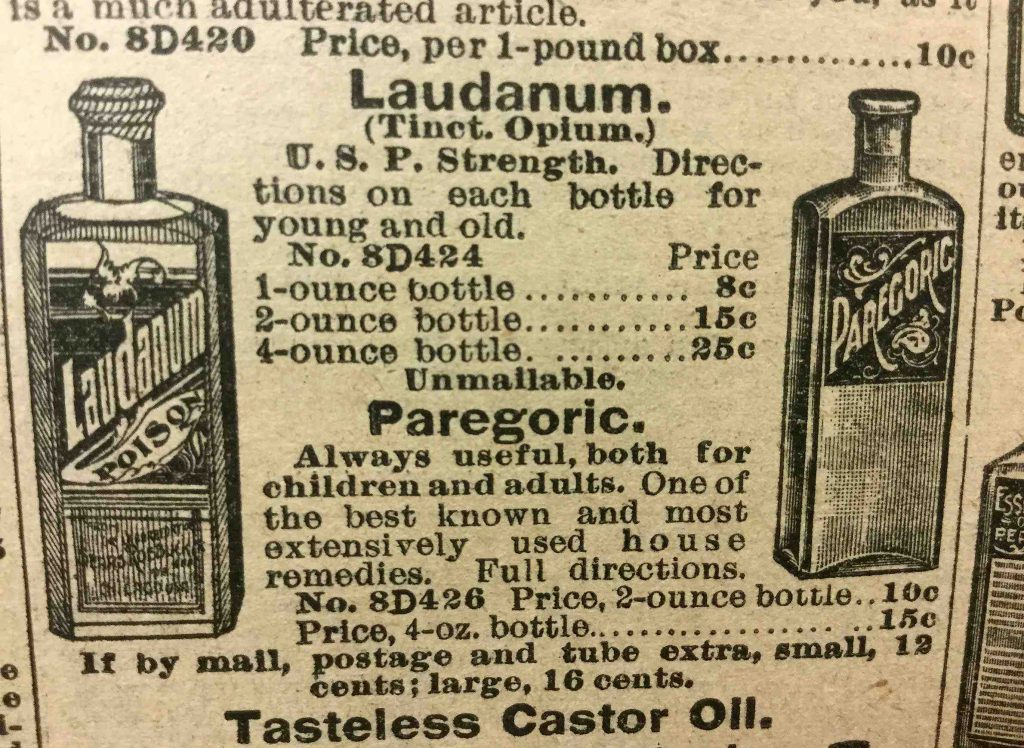 Laudanum, a tincture of opium, was among the products for sale in the 1905 edition of the Sears catalog. Photo by Mike Mozart (CC BY 2.0).

But eventually, the tides changed, or, as Dahl characterized it, “the pendulum swung back.”

By the 20th century, opiates and what increasingly were termed opioids were heavily scrutinized and their use increasingly controlled and prohibited. But the pendulum swung once again by mid-century when the focus of doctors looking to use these types of drugs shifted toward treating people suffering the pains of cancer and other terminal illnesses.

This period of opioid acceptance was short lived, however. In the early 1970s, as states and Congress established strict new drug laws and President Richard Nixon announced a “war on drugs,” an ensuing strain on morphine supplies left people facing chronic pain with fewer resources for treatment.

“The magnitude and scope of pain treatment inadequacy hasn’t decreased substantially in the past decades in the United States, despite the fact that there’s been a long-standing awareness of this problem,” Dahl said.

In 1997, Dahl worked with the Joint Commission, a non-profit organization that grants accreditation to health care organizations, to develop standards of pain. The idea behind this effort was to compel doctors to confront their patients’ issues with pain, despite fears of the adverse effects of opioids and the general stigma against the analgesic. Dahl noted that some critics have blamed the subsequent opioid crisis and wave of overdoses on those standards.

Opioid prescriptions rapidly increased in the early 2000s with the embrace of pain relievers like oxycodone and hydrocodone, followed by abuse and an epidemic of overdose deaths. Dahl explained that a big part of the opioid crisis flows s from another crisis of patients not getting adequate pain treatments, along with the rising costs of alternative therapeutic measures.

Dahl said the opioid pendulum remains in motion, slowly moving from prodigal prescriptions of the drugs to a more measured and safer approach. She said a growing concern among medical professionals now is making sure it just doesn’t swing too far, leaving patients to suffer in pain.

“Pain is inevitable, but suffering is optional. And what we’ve got to do is to make suffering much less in this country,” Dahl said. “It’s not optional for us to allow things to continue as they are and they’re only getting worse at the present time.” 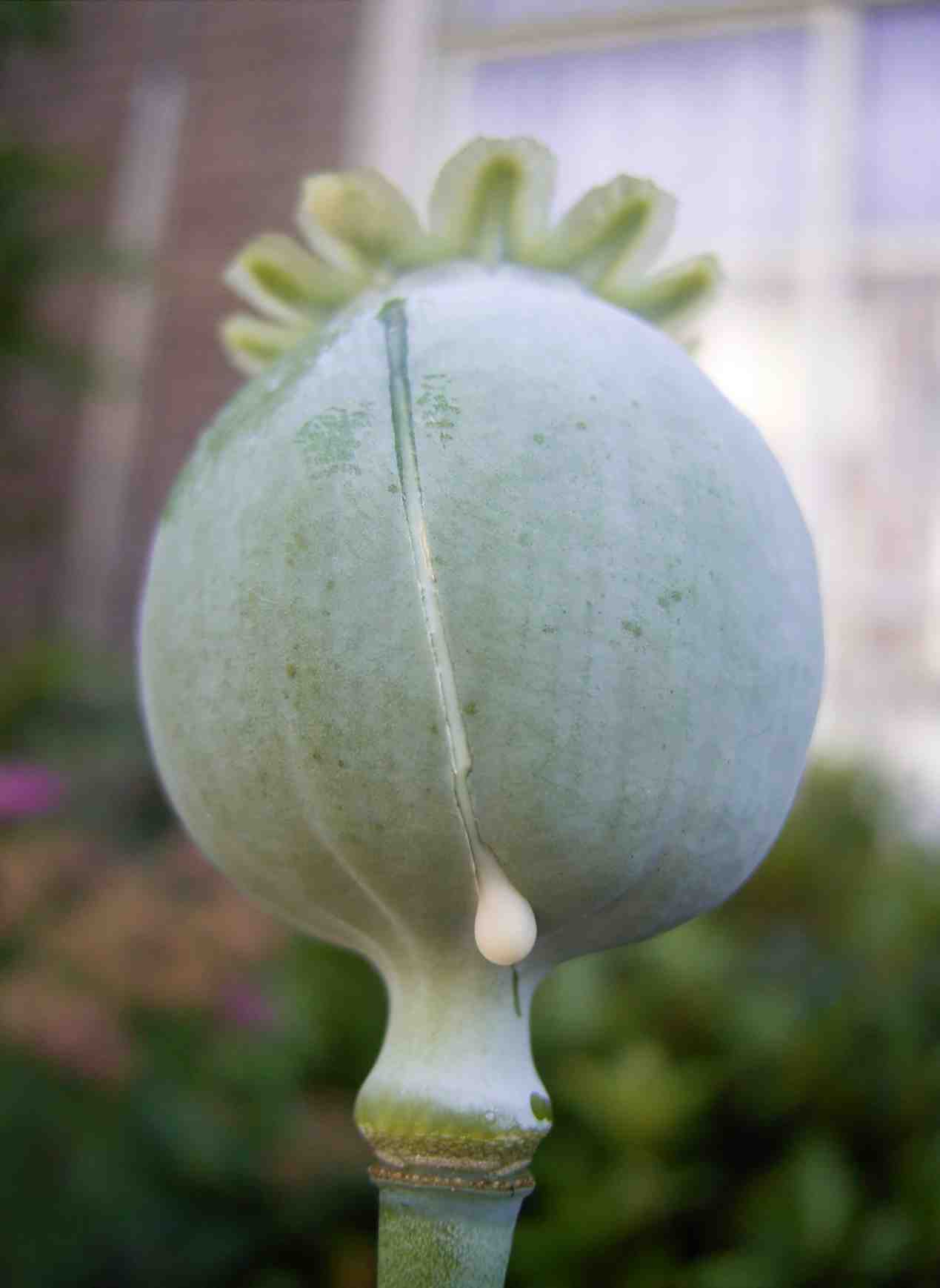 Opium, Opioids And A Pendulum Of Pain was originally published on WisContext which produced the article in a partnership between Wisconsin Public Radio, Wisconsin Public Television and Cooperative Extension.