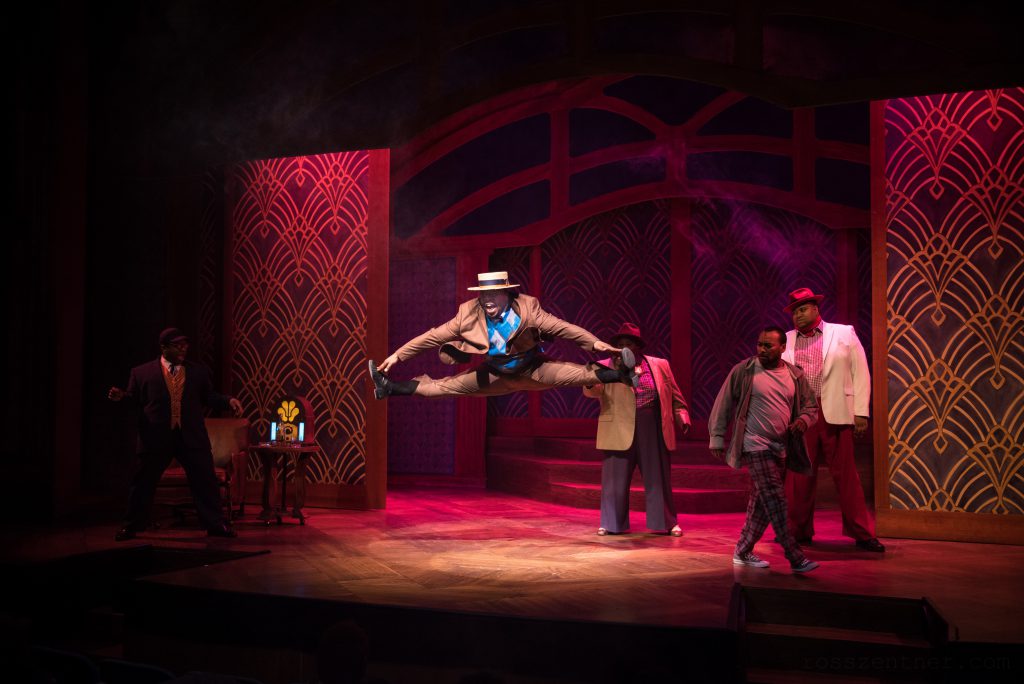 There are two requisites to get you through the dance party musical Five Guys Named Moe at the Skylight Music Theatre through February 10.

One is a willingness to succumb to (or laughingly decline) a Conga line and similar shenanigans of fun the audiences at the Cabot Theater are invited to join.

The other more important one is a fondness for the exuberance of bandleader-songwriter Louis Jordan whose jump blues, boogie madness and racy story-telling in the 1930s to 1950s stood out in a zany Big Band swing era (it wasn’t just Glenn Miller time but Spike Jones and Kay Kyser time). Yet Jordan made his biggest marks with styles and flair that were transitional influences on jazz and rock’n’roll. Many regard him as a secular spiritual father of today’s dominant popular music.

The inherent power and spontaneity of his rhythms and talkative lyrics have kept Five Guys Named Moe alive as a musical concept for 20 years but with only passing affection for the theatrical traditions of character and story building. The Skylight production decided that the atmosphere of a party was more important than the reasons for being at the party in the first place.

Director Malkia Stampley, a co-founder of the Bronzeville Arts Ensemble, has stepped away from the degree of control and focus demonstrated recently in Black Nativity. There is a story here worth paying attention to, but Stampley is more concerned with cutting loose the traces on her five horsemen of energy, the Moes of various sizes and weights who emerge from the radio in the musical to buck up the sulking, drinking rejected lover known as Nomax.

Here the Skylight is fortunate it has an actor, Gavin Lawrence. As Nomax, he tries to sustain some naturalistic moments and weaves some touching baritone into the sad ballads that surprisingly are one of the best parts of the Jordan catalog. He tries to retain his character base even when thrown into the excess hoopla.

The radio-birthed Moes are suited up in flashy jive comedy outfits and sometimes cross-dressing. Choreographer Lanette Costas has laid funky arm and leg gyrations on the five, forcing them to hit spots more than hit the reasons in the lyrics. Poses and finales they land with perfection.  Sometimes the words and purpose of what went before are muddled.

The group choral work is much the same, a blur of high-note harmony that gets much better in the second act, but often makes the pleasure of the words and rhythms disappear in an onslaught of “ain’t we got fun?” mania onstage.

In this era, the actors offer some clever apologies for the woman-hating lyrics (Jordan and company in this nightclub era loved to moan in their beer about the power women had over them). But actually it might have been better if the words (“Safe, Sane and Single”) were performed as if to be taken more personally.

The highlight is the Funky Butt Club of musical presentations featuring some of Jordan’s best known hits (“Let the Good Times Roll,” “Choo Choo Ch’Boogie”) and also the show’s top moment. That’s when Lorenzo Rush, Jr. as Big Moe stops trying to impress us with his size and flamboyance and lets loose real vocal power, leading the house in “Caldonia”.

Other Moes in the cast are James Carrington (Four-Eyed Moe), Shawn Holmes (No Moe), Kevin James Sievert (Little Moe) and an impressive trick dancer, Sean Anthony Jackson (Eat Moe). All of them hype boundless energy, as much the director’s overblown idea of happy times as theirs. 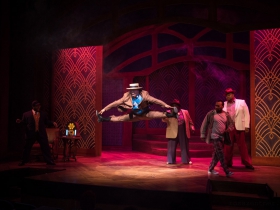 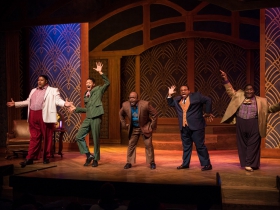 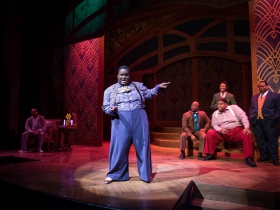 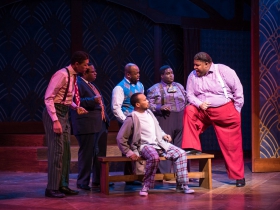 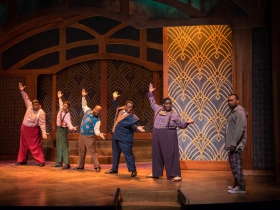 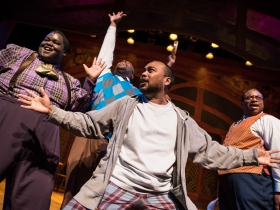