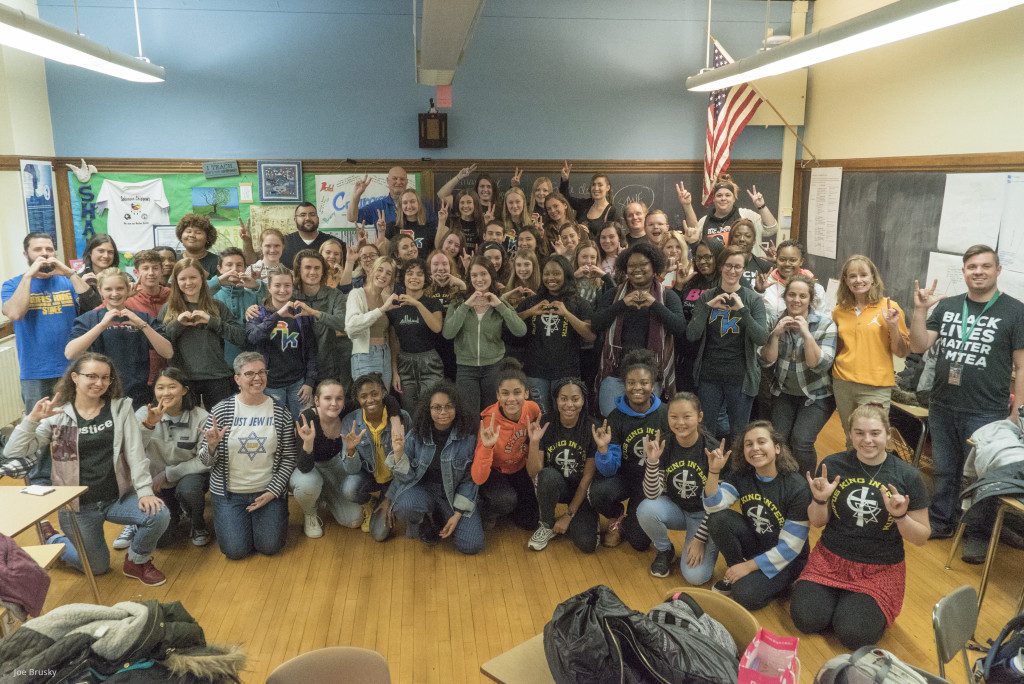 Students at Rufus King took a photo showcasing their diversity, positivity and compassion in response to a racist photo that got national attention. Photo courtesy of Joe Brusky/NNS.

After the bell rang on Friday afternoon, rather than heading out to the rows of school buses lined up out front, a group of more than 60 students piled into room 308 at Rufus King, 1801 W. Olive St., to make a statement.

They gathered to create a response to a photo that garnered nationwide negative attention online about high school students in Wisconsin. The photo showed about 50 high school boys standing in front of the Sauk County Courthouse in Baraboo, with half of them appearing to salute Hitler.

“We wanted to show the country and the world that this Baraboo picture is not what we think of when we think of our community,” said Alice McGuinness, a 17-year-old senior at Rufus King. “We wanted to offer our representation in contrast to the very hateful symbol displayed… We wanted to create something that was positive and full of love and represents Wisconsin in a positive light.”

Before they began discussing what they wanted to express in the photo, students from the Jew Crew and the Friends of Islam groups opened the meeting with a blessing. They then decided that they wanted to use the hashtag #WIUnitedInLove to represent the image.

Joe Brusky took the photo and a video of the gathering and shared it on the Milwaukee Teachers’ Education Association Facebook page on Friday, which now has more than 18,000 views.

Estella Ramirez, 17, said she was inspired to show up after a conversation in her English class. When she walked into class last Monday, the photo from Baraboo was on the board. 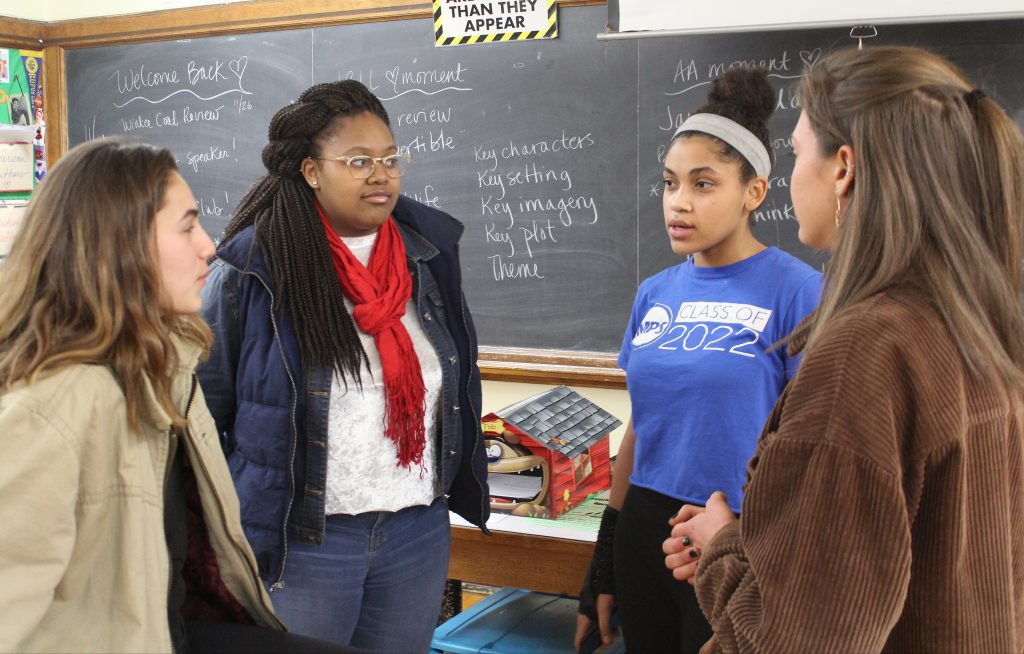 Her English teacher, Kelly O’Keefe-Boettcher, invited the class to meet after school on Friday to create a Rufus King response.

In the video, O’Keefe-Boettcher promises to protect her students’ physical safety as well as their spirits and their minds in the face of hateful acts.

“For me personally, it was important to participate because I know what it feels like to be singled out or to be attacked,” said Kenadee Henderson, 16, of the hate expressed in the photo. “We wanted to let everyone know how we felt about the situation. We told our friends, teachers, everybody.”

Hannah Olenchek, 17, got up in front of her chemistry class to invite her peers to join her in attending Friday’s meeting. She said that she was frustrated that incidents such as the photo can be dismissed as a joke, and she said she felt that people needed to realize the harm that it caused.

“Us confronting it and bringing it to the table shows that we want to make sure that people know that this isn’t okay,” she said. “This is something that needs to be addressed, not something to just be shocked by.”

Jaycelan Stewart, 14, said that so far in her freshman year at Rufus King, she has learned to use her voice.

“At this school there are kids with two pairs of shoes and kids with 20, but what brings us together is standing up for what we know is right, and even if it’s a small group of people, it does matter,” she said.

Rufus King’s diversity is another reason why O’Keefe-Boettcher said she felt that the school had a responsibility to show another version of Wisconsin. According to the Public School Review, Rufus King has one of the most racially diverse student bodies in the state.

O’Keefe-Boettcher added that she hopes the photo fosters “dialogue and discussion.” Students said that the video was already sparking conversations in their classrooms and in the hallways at school Monday.

Ramirez said she hopes students around the country have safe spaces in school to learn about and talk about current events and issues.

O’Keefe-Boettcher sees her duty as a teacher to create spaces for students to talk about painful events happening in the world, to be able to process them and to have a platform to take action.

“Schools are responsible for loving young people into the world, so when I know that there is violence or something rooted in white supremacy or racism, my first thought is always going to be my students,” she said. “What is our responsibility as educators to respond to that?”