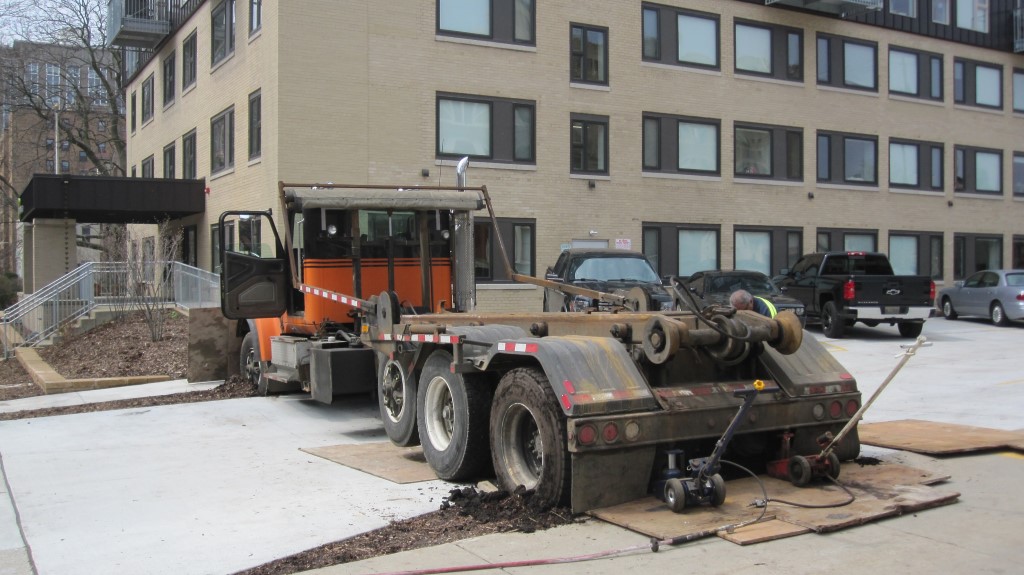 It was back in November that part of a four-story office building at 1840 N. Farwell Ave. collapsed into the heavily trafficked thoroughfare while crews from Recyclean, Inc. were working to demolish the remainder of the building. The “Mini-Earthquake,” as one observer described it to Urban Milwaukee writer Jeramey Jannene, caused no injuries, but windows were shattered in a nearby building, and the one-way southbound artery was closed for a number of hours.

This deconstruction project was done to clear the site for for a new 13-story mixed-use building at 1832 and 1840 N. Farwell Ave. being developed by Jim Wiechmann and his firm Wiechmann Enterprises, in partnership with Tim Gokhman of New Land Enterprises, and it was the latter who was overseeing the deconstruction project that caused the explosion. 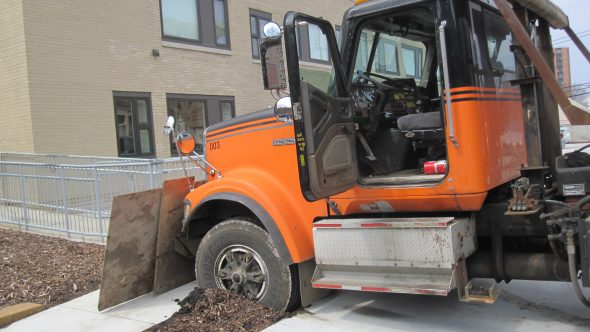 Today a smaller, more comic mishap occurred when a semi-truck owned by Miller Compressing Co. and doing work for the Wiechman-Gokhman high-rise project somehow became stuck in landscape beds while attempting a curious and perplexing maneuver in the parking lot of Sage on Prospect, 1825 N. Prospect Ave.

Mike O’Connor, the CEO of Dominion Properties, the developer and operator of Sage, was on the site where a crew was working to free the stuck vehicle and was a bit stunned by what he saw.

“These aren’t even my contractors,” he said, eyeing the workers mired in mud, struggling at their task. O’Connor characterized the offending vehicle as an “interloper,” adding that he was not aware that his parking lot was being used for the transport of heavy construction equipment to the site of the 13-story development across the alley on Farwell Ave. But that is exactly what happened.

The Farwell site was a flurry of activity today; the alley clogged with earth-moving vehicles. Trucks and equipment also lined the adjacent parking spots on the avenue, while a portion of E. Kane Pl. between N. Farwell and N. Prospect avenues had also been closed to traffic.

All of this excitement and potential encumbrances may explain why the operator of this now-stuck semi-truck may have chosen this ad hoc easement across the Dominion property. But it does little to explain how the “Roll-off” truck, used to haul Dumpsters, happened to maneuver itself into the curious position in which it became stuck.

The vehicle was facing southbound, about ten feet into the Sage parking lot, crossing the parking lot access to busy one-way northbound N. Prospect Ave. It would have taken many turns for the vehicle to be found in the tight position where it was, completely blocking the access and at a 90 degree angle from the ordinary traffic lane. The truck stopped inches from the access to the building, which lies about five feet south. Why it was facing south made little sense unless the plan was somehow to drive backward up Prospect. The only plausible direction for any vehicle at that spot would be east or west.

It appears the operator had spent some time at the site until assistance arrived from a different Miller truck. Two jacks were placed at the rear of the trailer in hopes of lifting the vehicle from the plant beds.

O’Connor was not pleased that his lot was being used without authorization, all the more since the weight of the stuck truck was significantly compressing the recently laid landscape beds that line the driveway. “There are perennials beneath the wheels,” he said.

Shortly thereafter an automobile approached, driven by Gokhman, who got out of his car to talk to O’Connor. That must have been a fascinating discussion, but alas, we were unable to listen in.