By Brendan O’Brien, Milwaukee Neighborhood News Service - Jan 28th, 2016 11:39 am
Get a daily rundown of the top stories on Urban Milwaukee 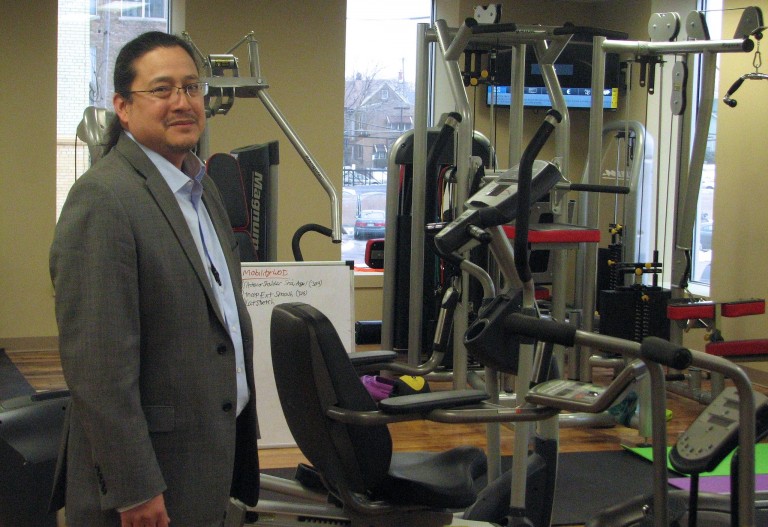 The grand staircase and the creaky wooden floors of the Goldmann’s Department Store were a source of warm familiarity for generations of Milwaukeeans on the city’s South Side until the department store closed about a decade ago.

Now restored, the staircase leads to another community treasure: the Gerald L. Ignace Indian Health Center. The building at 930 W. Historic Mitchell Street, once home to the all-inclusive department store, now houses the all-inclusive community health center, which moved from its former location a block west about a month ago. 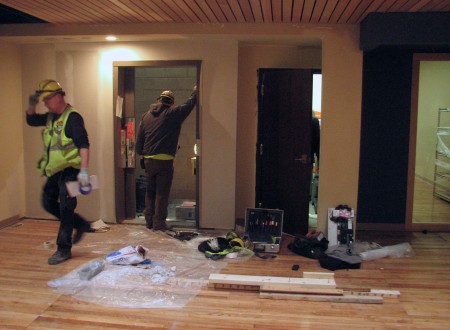 Workers put the finishing touches on the renovation at the Gerald L. Ignace Indian Health Center. Photo by Brendan O’Brien.

“It’s a one-stop shop and now it aligns more with our mission to improve the health and wellness of native people in the greater Milwaukee area,” said Dr. Lyle Ignace, the health center’s executive director.

“Isn’t it something…look at it,” said Marge Makowski, a health center staffer, as she climbed the staircase and walked past a few workers who were putting the finishing touches on the ceiling. “Goldmann’s was the place to shop. Everything you needed was here, right here.”

Ignace, Makowski and the rest of the staff have spent the last few weeks unpacking boxes and getting settled into their new space. The move, according to Ignace, was made to accommodate the growing health and wellness needs of the community that the center serves.

“It’s a big deal for me because I live only 10 blocks away, and other doctors would have me go way far out,” said Levi, a 50-year-old unemployed man who declined to give his last name as he sat in the waiting room. “This clinic comes in handy for me because my doctor is right here if anything happens.”

The 40,000-square-foot health center, paid for through $5.5 million in tax credits from the Wisconsin Housing and Economic Development Authority, is more than triple the size of the old space. The new space consists of a medical clinic, a behavioral health clinic, fitness center, a large community meeting room equipped with a full kitchen, a youth center and board room. The health center eventually will include eye and dental clinics.

The old space “was out-of-date and inefficient” while the new location is “more conducive and more inviting. This is light years from what we had before,” said Ignace as he strolled through the spacious, brightly lit hallways on the department store’s refinished hardwood floors.

The health center has about 7,500 patients, many of whom are poor and have had trouble accessing health care in the past. The Affordable Care Act has allowed those people much more access to care and, as a result, has created a need for a larger, more efficient health center, Ignace said.

“There is a lot of unmet need out there and the Affordable Care Act has helped tremendously reach the non-insured and underinsured,” he said.

The wide variety of services the health center offers was the vision of Ignace’s father, Gerald, who helped open the original location in 1999. He wanted to serve Native Americans and others through a holistic approach that focuses on the body, mind and spirit of the individual.

“It’s not just a medical clinic. It’s about providing a community with a wellness center,” Ignace said.

In addition to being larger, the design of the health center’s interior creates more efficiency. The space has wide hallways and a dozen examination rooms, twice as many than the old location, allowing for more doctors to see patients and a better flow throughout the clinic, Ignace said. Other touches are intended to put patients at the center of their care, such as waiting areas and an examination room designed for children.

While focusing on creating an efficient, inviting space for patients, Ignace wanted to instill a sense of community. As a result, he promised Makowski that he would keep and restore the famed staircase. He kept his promise.

“You get the feeling of community here. It’s all of us,” she said.