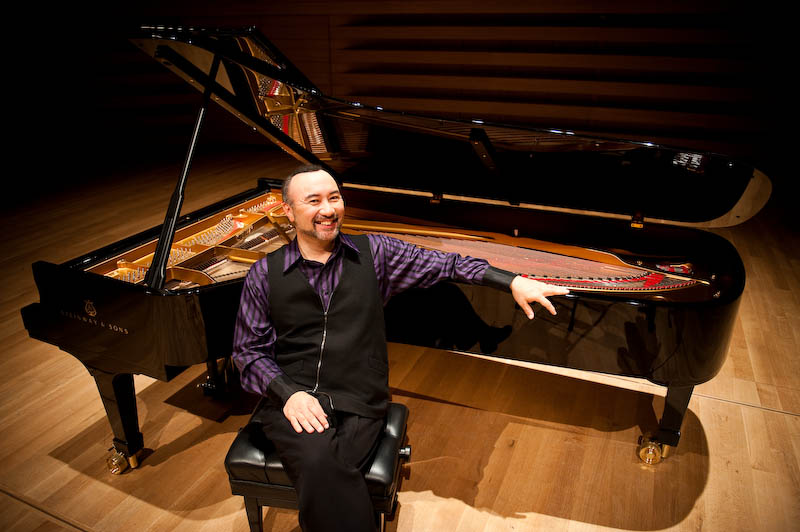 The timpanist rolls and the pianist thunders in on one of the most recognizable themes in classical music. Even if you didn’t know this Romantic masterpiece by name, you would recognize the rhapsodic opening bars. The Milwaukee Symphony Orchestra, pianist Jon Kimura Parker, and guest conductor Lawrence Renes teamed up on Saturday evening for a thrilling performance of an old favorite: Edvard Grieg’s Concerto in A Minor for Piano and Orchestra, Op. 16.

The overwhelming effect of the concerto was monstrously satisfying. Parker played with power, accuracy, and a deft musical touch. In the first movement, Grieg challenges the soloist to cover the keyboard with terrific strength while striking bull’s-eyes over the full range of the piano. Parker made the demands seem easy. His hands produced a weighty sound without banging, and he played with such commanding poise that the spaces from which he stole time were natural and graceful.

In the Adagio, a movement of exceptional beauty, Parker tamped down the fire of the first movement to a level of comforting warmth. His conversational musical exchanges with the orchestra glowed with companionable bonhomie, and he was sentimental without ever being saccharine. Parker is a mature and sensitive artist.

The Allegro moderato molto e marcato brought one woman seated in front of me to near rapture; I quietly shared her swoon over the passionate nature of the performance. Throughout the concerto came lovely passages from within the orchestra, particularly from oboist Kevin Pearl, bassoonist Rudi Heinrich, and flutist Jeani Foster. However, several mystifying moments of competing downbeats occurred between the soloist and the podium. Parker’s rhythmic intentions were crystal clear, leaving Renes as the culprit for the incoordination.

After the Grieg, Parker spoke to the audience about three pianists who inspired him, all of whom he had met: Arthur Rubenstein (of course), Elton John (not surprising, really), and Oscar Peterson (what a great cross-genre happenstance—a jazz giant sparking a classical artist). For an encore, Parker offered up a transcription of Peterson’s incredible “Blues Étude.” Shifting gears was momentarily jarring for the listener after such a commanding performance of the Grieg, but the result was stunning. Peterson’s étude was a bebop barnburner, and Parker flew around the keys like Peterson’s ghost had haunted the piano.

Now that the search for a new MSO music director is on, every guest conductor is a potential candidate. Renes, with close professional ties to Edo de Waart, has a growing reputation and real experience under his belt. The numerous unmatched downbeats with the soloist, though, seemed surprising, and unfortunately, the unremarkable second half of the program did little to further recommend him.

Franz Schubert’s Symphony No. 7 in B Minor, D. 759, “Unfinished,” is standard orchestral repertoire. Standard rep comes fully loaded with the danger of sounding familiar to the point of being ordinary. The MSO played beautifully. The main theme of the first movement in the cello section was exquisite. The quality of the orchestra was not at issue here—it was what did not happen musically that left the important impression. Renes’s interpretation was tame, and a vertical, pedestrian feel burdened the tempo. The second movement, seasoned with elegant solos by clarinetist Todd Levy and oboist Katherine Young Steele, lacked inspiration. Phrases ran bar to bar rather than in larger musical arcs, and the conductor revealed nothing dynamic about the potential of his artistic personality.

The Symphony No. 7 in C Major, Op. 105, by Jean Sibelius completed the program. This enigmatic bit of tone painting by the Finnish master has a way of washing over the audience with a pleasant but altogether unmemorable effect. Although one is unlikely to walk away from the Sibelius whistling any of its melodies, those at the MSO performance will not soon forget the glorious trombone work of Megumi Kanda, the undisputed queen of the incomparable MSO brass section.