For more than two decades Renaissance Theaterworks has elevated its reputation and technical capabilities with literary depth and great roles for women. It was almost inevitable as it enters the ranks of must-see Milwaukee theater companies that it would turn to Peter Shaffer’s Lettice & Lovage, running through May 3 at the Broadway Theater Center.

Shaffer – an erudite master of theatrical devices from his Black Comedy to huge hits like Equus and Amadeus — wrote this comedy in the late 1980s specifically for Dame Maggie Smith as Lettice Douffet. He deliberately broke the mold of expectations, abandoning the usual devices of Broadway convenience (romance, tragedy, madcap mix-ups, whodunit) to concentrate on two middle aged oddballs.

Inevitably Smith’s star power and elegance with bon mots haunts new productions  —  even suggestions that her skills made it a hit on two continents, though that requires forgetting there were other Tonys being thrown about. Lettice is simply one and maybe not even the best one of two strong parts in a prickly comic duet for two unusual women in the preservation tour business.

Lettice is the flamboyantly theatrical one married in her anglophilia to long departed royal cuisine and heroic deaths. Her boss, Lotte Scheon, is being pulled out of her bureaucratic shell not just by Lettice’s example but by her own hidden fury over modern architectural intrusion on her beloved London.

Shaffer (and this is a virtue) refused to soften the historical ardor of these personalities. He didn’t Americanize the reliance on high British vocabulary or the butterfly-delicate interplay between the characters though he clearly never solved his problems with the ending.

The resulting comedy, funny as its best scenes are and famous though it is in reputation, would sink like a stone in Milwaukee without Laura Gordon as Lettice and Carrie Hitchcock as Lotte, the Teutonic boss lady drawn into full manic partnership. (The Lovage of the title is a 16th century drink that provides a plot twist.)

Gordon’s wicked comic timing is well known in these parts but she also reveals Lettice as an always wounded and always uncontrollable romantic. Hitchcock matches her command of language and creates a believable repressive who provides the play’s dramatic motion, moving from stern critic of Lettice’s antics to an enthusiastic and sometimes embarrassed participant in her fantastic impulses.

These actresses work together but in contrasting ways. Gordon can grab stage center to land the grim determination and witty cadences but she can also sneak up on the inside rail to show a more vulnerable side. Hitchcock often has to create a stoic presence and then seamlessly erupt into demand and dominance.

The style of the piece not only requires pinpoint performances to carry us through some faltering repartee. It almost seems to require the grandeur of presentation available right next door in the elegant Cabot Theater, which has that large proscenium stage to capture the preserved mansions, the parade of tourists, the musty office building, the basement flat.

But Lettice & Lovage is being done in the 100-seat shoebox Studio Theater and there director Jenny Wanasek and crew are working wonders.  Perhaps only costume designer Jason Orlenko could complain that there is little room for the sweep and flourish of the Elizabethan dressing gown and similar garment surprises that dot the work. But scenic designer Steve Barnes cleverly suggests the grandeur in a parade of doorways and workable sets. Lighting designer Alan Piotrowicz flows the action along and dialect coach Raeleen McMillion gets credit for helping Wanasek keep the language and manners intact.

It’s a large capable cast, though they must have been tempted to spend their time watching in awe at the concentration and precision that Gordon and Hitchcock were bringing.

Knowing she had two such accomplished experienced lead actresses, Wanasek let them work, providing some subtle choreography, speed finesse and general support, such as Bryce Lord’s comic turn as a stiff barrister seduced into the fantasy. If there is some slowness toward the middle, blame Shaffer not the actors. They transport us back into the first class suite. 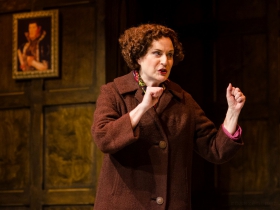 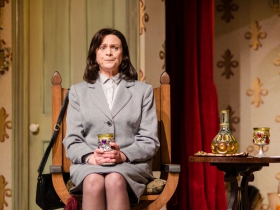 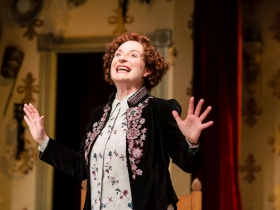