Join us for the Milwaukee Film Festival's showing of Detropia and post-movie chat and happy hour. 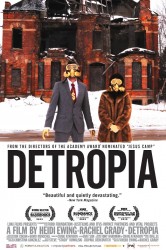 If you see only one film at the Milwaukee Film Festival* make it Detropia.  The powerful documentary features imagery and interviews with residents of Detroit. Following the showing on October 9th at the Oriental Theatre, Urban Milwaukee will host a happy hour at Von Trier to discuss the film and Detroit.

The documentary has four scheduled showings throughout the film festival. Buy tickets.

Detroit’s story has encapsulated the iconic narrative of America over the last century— the Great Migration of African Americans escaping Jim Crow; the rise of manufacturing and the middle class; the love affair with automobiles; the flowering of the American dream; and now . . . the collapse of the economy and the fading American mythos. With its vivid, painterly palette and haunting score, DETROPIA sculpts a dreamlike collage of a grand city teetering on the brink of dissolution. These soulful pragmatists and stalwart philosophers strive to make ends meet and make sense of it all, refusing to abandon hope or resistance. Their grit and pluck embody the spirit of the Motor City as it struggles to survive postindustrial America and envision a radically different future.

* Urban Milwaukee, Inc. is a Milwaukee Film Festival community partner. We encourage you to see a lot of films beyond Detropia, especially the one about my hometown of Janesville.

Also of interest: Our friends at Fund Milwaukee and Local First Milwaukee will present a screening of the film “Fixing the Future,” at the Rosebud Cinema on October 10th. The screening is open to the public and admission is $9. Doors open at 5:30pm for a social hour and the film begins at 6:30pm. A panel discussion will follow the screening.