The Tragedy of Chris and Sue

How the friendship of Abele and Black turned into bitter enmity. 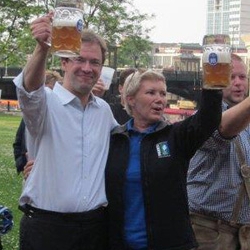 Milwaukee County Executive Chris Abele is a big fan of Shakespeare and was the biggest American donor to the Royal Shakespeare Company in England, giving $5 million to its effort to build a new theater. And there is something Shakespearean about his falling out with Parks Director Sue Black, a tale of two friends whose separate ambitions turned them into mortal enemies.

Somewhere, I’m told, there is a photo of Abele and Black hugging each other in front of the Mitchell Park Domes. Black had recruited Abele to donate money to a Domes improvement project. They had much in common. Both are quick to see shortcomings in how things are being done, free with criticism, and certain they can do better.

When Black took over as county parks director, Park People director Jim Goulee once told Milwaukee Magazine, she asked her managers to explain why they did things as they did. “The answer was always, ‘This is the way we’ve always done them.’ That’s the wrong thing to say to Sue Black.”

It would also be the wrong thing to say to Abele, who was convinced Milwaukee County could be radically improved with smart management. Abele likes to talk about the pursuit of excellence. “These days people don’t commit to long-term rigor toward expertise or virtuosity much,” Abele told the New York Times. The “level of greatness” of the Royal Shakespeare company was what attracted him as a donor. Excellence was also what Black strived for.

Black is openly gay and has been for many years. Abele has always been a strong supporter of gay issues. “Chris Abele has been an ally of the LGBT community and was a strong opponent of the 2006 constitutional amendment (banning same sex marriage in Wisconsin),” Katie Belanger, executive director of Fair Wisconsin, told the Wisconsin Gazette. “Fair Wisconsin was very grateful for his generous contribution.”

Though Abele has pushed hard for budget cuts, he championed and signed legislation providing domestic partner benefits, at an estimated cost of $747,000 annually. Behind the scenes, Black lobbied board members for the bill.

Black had toyed with running for county exec, but decided to support Abele, who praised her leadership of the parks while campaigning and assailed Scott Walker for not giving Black a raise. Black was a key policy advisor to candidate Abele and served on his transition team. “He was like a best buddy of Black,” says one county insider.

But for Black, it seems, the friendship came second to the parks. As I noted in a previous column, she has a history of doing end runs around her boss to kill proposed cuts for the parks in the executive budget, lobbying state legislators or county board members to restore the money. The recent revelation that Scott Walker kept her undated resignation letter on file to pressure her to support his budgets provides further evidence of how Black related to her bosses.

When Abele battled board members to use a less expensive facade to repair the O’Donnell parking garage, Black stayed neutral. Why antagonize board members you might later need to support the parks budget? When Abele’s first budget included a $1 million cut in the parks budget, she successfully lobbied board members to restore the money. One county insider says Black actually helped draft the amendments for this, but Black’s supporter, supervisor and parks committee head Gerry Broderick, calls this “B.S.”

When Abele ran for reelection as a fiscal conservative, Black undermined his campaign, joining Broderick to announce a plan to spend $75 million over five years on deferred maintenance at the parks. An obviously blindsided Abele said he couldn’t commit to this proposal. Instead, candidate Abele declared the parks could realize greater efficiencies, only to be slapped down by Park People V-P and Black loyalist Susan Spoerk, who contended Black already ran a “lean and efficient” department.

The parks were personal for Black. Growing up in a troubled family, she once recounted, the parks became a hangout and refuge. Her parents divorced when she was a teen. “Everybody else in my family was busy with their life, and I guess I just had to make a life for myself,” she told Milwaukee Magazine.

But for Abele, too, there were emotions at work. For years, his detractors had sniped that the philanthropist was simply living off his daddy’s money. Winning the county executive position proved he could succeed on his own, so the job was hugely important. But it had gradually become clear his friend the parks director was not someone he could count on as a team player.

Black is charismatic and really out there as a personality; Abele is far more reserved and cool. He has a history of losing or letting staff go when he is not satisfied. He founded the Milwaukee Shakespeare company with his college friend John Maclay as artistic director, but replaced him a few years later. He recruited Milwaukee Boys & Girls administrator Jeff Snell to administer his Argosy Foundation and former Journal Sentinel features editor Diane Bacha as Executive Director of Milwaukee Film, but both were soon gone. As county exec, he brought in old pros like George Aldrich as chief of staff and Jeff Bentoff as communications director, but both left quietly in less than eight months.

And Abele sounded awfully unfeeling in explaining why he fired Black. “Jobs change,” he said. “Nobody gets an appointment for life.” Quite a contrast to how Abele described the situation for Patrick Farley, his head of administration, when the county board delayed approval of his reappointment. “Pat is a decent, good human being,” Abele said. “He has a family. This is his job we’re talking about. He deserves better.”

Black never imagined getting fired by her old ally, the man she helped sell as a novice candidate for county exec. She seemed devastated, says a source. “He was my friend,” she kept saying. “He was my friend.”

Correction: An earlier version of this column said Diane Bacha served as development director of Milwaukee Film. She was actually the executive director.

-Back in September, community columnist Nancy Ettenheim wrote this in the Milwaukee Journal Sentinel: “On the strength of this proposed pay raise, which was offered to Black, and which she accepted, Black turned down an even more lucrative offer from Chicago. In the land of contract law, this could be viewed as “consideration” and a good-faith demonstration by Black of her intention to abide by her position in Milwaukee. These are precisely the grounds for a suit cited by Black’s lawyer Frank Gimbel.

-The story of Black’s firing according to the Journal Sentinel is that she was fired for “poor communication.” That’s hilarious. Black may have been a better communicator than any county official since the late Dave Schulz, also a champ at promoting the parks. Black was fired not because she was poor at communicating, but because she was so good she kept undermining Abele’s budget decisions.

-And a question: at what point will the JS report to its readers that Black was previously dismissed from her job as state parks director? Whatever you make of Abele’s decision (and my sense is that most people, at least initially, opposed the firing), the information about Black’s past seems relevant.

-Finally, a historical note: Walker’s use of an undated resignation letter from Black was straight from the playbook of the late Mayor Henry Maier (1960-1988), who demanded undated letters of resignation from several aides, and never forgave the hated Milwaukee Journal for writing a story exposing this.

3 thoughts on “Murphy’s Law: The Tragedy of Chris and Sue”