Getting High on Brit Floyd

No they’re not quite Pink Floyd, but they still left me somewhere on the dark side of the moon.

“I’ve always been mad, I know I’ve been mad, like most of us are. But you have to explain why you are mad.”

About this time last year I was applying for a day job with a large government agency, which employs a drug test. It’s part of this ineffective prohibition program we’ve been running forever that wastes countless taxpayer dollars. It’s 2015, people. You know, the year Marty McFly and Doc Brown went to in Back to the Future II. One year after Colorado legalized marijuana citizens of that state are expected to get a tax refund thanks to a booming industry that is far less harmful than tobacco or alcohol (or firearms or automobiles, for that matter).

Last night I was at the Riverside Theatre, experiencing my second high of the day, when the above words from the opening of Pink Floyd’s landmark 1973 album Darkside of the Moon echoed through the building. They are not actual song lyrics, but an audio sample. The first thing you hear from David Gilmour is “Breathe, breathe in the air.” (It would not be Gilmour last night, but a bloke from the tribute band, Brit Floyd.) Not long before arriving at the show I breathed in an intoxicating air from a nontoxic water pipe (we love water in this town) and wondered whether most of us are mad.

I firmly believe marijuana should be legalized and regulated like alcohol, but my main employer doesn’t. So I withheld for a couple of months. But they dragged their feet with the latest test, and the job starts Monday, so I set last night, the Brit Floyd show, as my cutoff date. If the test wasn’t scheduled by yesterday, the job wouldn’t be mine. I set a similar cutoff date last year with the Cheech & Chong and WAR show at the Riverside. In both events my employer came through. I remain a productive member of society, but I also enjoy psychedelic music, comedy and plants. That shouldn’t be a problem.

Anyways, Brit Floyd was the first tribute band I’d ever seen. The closest thing was the Experience Hendrix show at the Riverside, which I saw about a year ago. I almost forgot it was a year ago, but then I noticed all the Badgers fans in attendance last night, and remembered that The Doors guitarist Robbie Krieger rocked a cut-off Badgers shirt at the Experience Hendrix show during Final Four Weekend 2014. Now March Madness is once again in the air.

What sets Experience Hendrix apart from Brit Floyd is that the artists on the Hendrix show are known in their own right as original musicians, while the members of Brit Floyd are best known for covering Floyd. “Do they have side projects? Do they have side fans?” These were questions my friend and I wondered aloud during the 20-minute intermission they stuck in the middle of a 2-hour and 40-minute set.

I thought they were only going to play Dark Side of the Moon and save the rest for their second show today at the Riverside, but they couldn’t not play the hits! It’s what they do best. All the musicians and backup singers were great. The thing about tribute bands is that they can play the sounds pretty close, but the voices are hard to nail. Especially when it’s a solo voice. Still, the lady who sang on “The Great Gig in the Sky” was big and blustery, definitely a crowd favorite.

Knowing what I know about Floyd, the visuals are important. Brit Floyd’s set had moments in that department, like the rainbow lasers that shot out into the crowd, the disco ball, the video clips, but I thought the foreground and spotlights washed out what was on the circle projector screen hanging behind the band. As a tribute production company, at some point you have to ask yourself, is the lighting there to support the illusion or the working musicians? Even Pink Floyd used visuals to mask themselves and emphasize the art of colors and radiant energy.

During intermission I went looking for libations. I scanned the fridges behind the bar and spotted a large can of “100% CZECH” beer. The latest century-old beer to enter the vintage design Tall Boy game (pioneered by Pabst Blue Ribbon and continued by Schlitz) is another brew with Milwaukee connections, Pilsner Urquell, “the world’s oldest Pilsner beer,” which is now produced by the global Miller Coors conglomerate with strong Milwaukee roots. I almost asked the bartender if there was any alcohol in it. You might say I was having a Prague flashback.

It was late the night I arrived in Prague back in 2009 and the only place still making food near our hostel were a few restaurants inside a mall. We got a table at a Japanese joint next to a TV playing Greek League basketball. I pointed to a beer on the menu, which was all in Czech, and the waitress, who spoke little English, took our order without saying anything. I didn’t inspect the can she handed me close enough to notice the tiny alcohol percentage. It was an NA beer. That drink might not have had any potency but someone in the rowdy Greek crowd (on their feet for most of the game) threw a flair into a player’s gym bag, so the game was suspended while they put out that fire.

Our very own Greek basketball player is on a Bucks team slowly climbing out of a slump, with their sights set on the playoffs, and I’m thinking about all this as I enjoy Brit Floyd. If the Badgers manage to win it all in Indy, who knows, we might see some gym bags light up. After all, a lot of the folks celebrating might want to “Have a Cigar.” 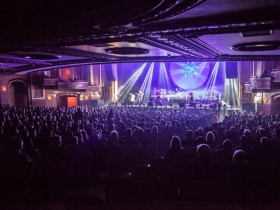 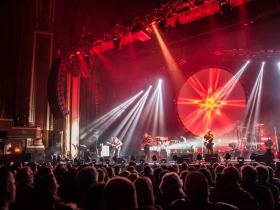 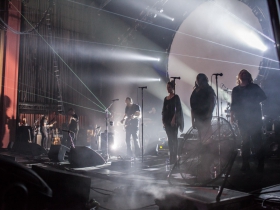 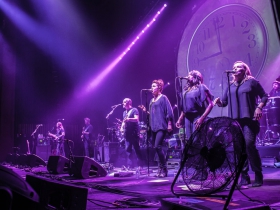 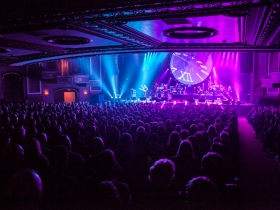 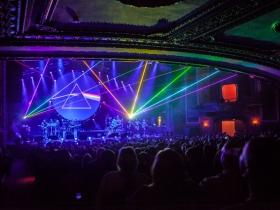